Semiconductor fab equipment spending shattered predictions in 2017, with a stunning 37% growth forecasted. In our previous article on Semiconductor Trends to Watch, we highlighted expectations for 11% growth in 2017 based on analyst projections. The record-breaking growth has been fueled by demand for memory and other leading-edge technology.

In the latest World Fab Forecast report published by SEMI, spending on semiconductor fab equipment, including new and refurbished tools, will grow to reach $55 billion by the end of the year. This leaves the previous spending record in the dust, which was $40 billion in 2011. Furthermore, continued growth is anticipated in 2018, which would mean back-to-back years of record-breaking growth. Fab equipment spending is expected to increase another 5% next year.

According to Gartner analyst Takashi Ogawa, the semiconductor equipment spending surge in 2017 is connected to a heavy demand for memory, “the NAND flash shortage was more pronounced in the first quarter of 2017 than the previous forecast, leading to over 20 percent growth of etch and chemical vapor deposition (CVD) segments in 2017 with a strong capacity ramp-up for 3D NAND.” This has spurred spending momentum on semiconductor capital equipment. Ichor Systems’ platforms are critical to the etch and deposition steps which support 3D NAND.

Ogawa also warned that the growth could turn negative next year if end-user demand for electronics doesn’t meet expectations. However, the most likely outcome anticipates positive growth in semiconductor equipment spending through 2018.

Ichor is positioned to support the expanding semiconductor capital market. Our subsystems enable etch and deposition, which contribute to multiple patterning, FinFET, advanced packaging, 3D NAND, and other technology inflections. Our refurbished semiconductor equipment program helps customers procure quality, affordable refurbished tools to support their manufacturing needs. As the semiconductor industry continues to grow, Ichor is ready to provide the services and support our partners need to keep pace. 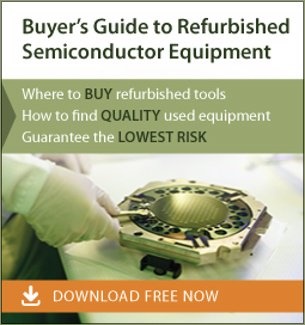 Ichor is an experienced leader in the critical subsystems and turnkey process equipment marketplace. Our capabilities enable the design and creation of a complete outsourced solution ranging from product concept to turnkey manufacturing and legacy service.